Sword Art Online Wiki
Register
Don't have an account?
Sign In
Advertisement
in: Candidates for Revision, Pages to be adopted, Under Construction Articles,
and 4 more

Alicization Lycoris
Renly (レンリ, Renri?), also known as Renly Synthesis Twenty-seven (レンリ ・シンセシス・トゥエニセブン, Renri Shinseshisu Tueni-sebun?), was a supporting character in the second half of the Alicization Arc, War of the Underworld. Although he was a high-ranking Integrity Knight, bestowed a Divine Object-class weapon known as the Twin Edged Wings, Renly was kept under cryostasis for years due to his inability to invoke the true power of his Divine Object. Following his awakening in the aftermath of the defeat of Quinella, Renly was one of the seven high-ranking Integrity Knights who participated in the battle at the Great Eastern Gate against the Dark Territory, commanding the left flank of the Second Unit of the Human Guardian Army.[1] With his dragon Kazenui, Renly later joined the Human Guardian Army's decoy unit on their journey to the Dark Territory to draw the Dark Territory Army away from the Human Empire.[3] Renly was one of the knights who survived the war.[4] 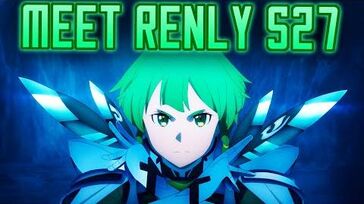 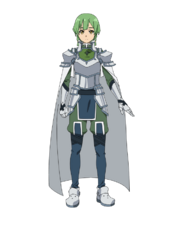 Having stopped aging at the age of fifteen after becoming an Integrity Knight,[1] Renly had a childish appearance: a short stature[5], a childish face[6] with round cheeks[1], and feminine eyes with long lashes that lacked knightly fortitude.[1] Renly had yellow eyes[7] and short, green hair[7] (gray in the novel text[1]) with a longer flock of braided hair at his temples on either side[7] The knight donned silvery plate armour over his upper body and hips, under which he wore green clothes.[7] The boy also had green pants that transitioned into bluish thigh-high socks, as well as a green patch over the upper portion of chest armour[7], decorated with the Axiom Church's crest that consisted of a cross overlapping a ring.[1] Renly also wore white shoes, while his hands up to his elbows were protected with silvery gauntlets.[7] A white mantle hung over the knight's back.[1]

Despite having once been a prodigy swordsman, Renly had lost the courage to fight after accidentally taking the life of his childhood friend, which resulted in him developing a post-traumatic fear of killing.[6] This fear of battle was only exacerbated by an inferiority complex Renly developed due to failing to invoke the Armament Full Control Art for his Divine Object[6] and failing to fulfil his duty as a knight[1], regardless of his genuine capabilities with his weapons, which demanded a high level of concentration to use properly.[6] Despite his effort to overcome this shortcoming by participating in the war against the Dark Territory, Renri found his fear to be so overwhelming that he fled the battle before it even began.[1] However, inspired by Kirito, Renly was finally able to overcome his fear and make use of the full potential of his Twin Edged Wings in combat.[6]

Renly was once a young prodigy swordsman in the Southacroith South Empire, unmatched by anyone in the empire.[1] Since his early childhood, Renly had a friend in his village with whom he shared a close bond.[6] Like a pair of birds, the two would both compete against each other and rely on each other for mental support.[6] When Renly was thirteen,[1] the two[6] of them advanced to the Central Capital Centoria[1], supporting each other as they overcame trials, until they eventually both earned the right to participate at the Four Empires Unity Tournament[6] the following year.[1] The two childhood friends both reached the finals of the tournament and had to once again compete against each other; however, their grand battle ended in an unexpected manner with Renly accidentally taking the life of his dear friend.[6]

Although he was granted the status of an Integrity Knight following his victory at the tournament,[1] Renly was burdened with a great void in his heart at the loss of his dear friend that would not subside even when he lost the memories of his past life by undergoing the Synthesis Ritual.[6] As a result, Renly lost the courage to fight and the joy of connecting heart-to-heart with another.[6] Although the young knight still displayed awe-inspiring talent with the sword, becoming a high-ranked Integrity Knight at an exceptional speed, he was rendered unable to invoke the Armament Full Control Art with a Divine Object bestowed to him personally by Quinella herself, despite his strong resonance with it.[1]

Having failed to invoke the power of his Divine Object, Renly was soon forgotten by the ruler of the Axiom Church, especially when Alice Synthesis Thirty became an Integrity Knight soon after him, quickly overshadowing the former prodigy with her astounding talent. Branded a failure, Renly had not been able to accomplish any significant feats as an Integrity Knight and was forced into cryostasis for five years by Chief Elder Chudelkin.[1]

When Eugeo and Kirito defeated the majority of the knights stationed at the Central Cathedral five years later, Renly was thawed from his cryostasis by the Chief Elder to assist in quelling the rebellion. However, Renly was unable to fulfil his duty to defend the Axiom Church, as Chudelkin and Quinella had already been defeated in battle by the time he had fully awakened. Seeing that all the high-ranking Integrity Knights shone only brighter despite their defeat, Renly agreed to Integrity Knight Commander Bercouli's request to participate in the upcoming battle to defend against an invasion from the Dark Territory, believing that this might help him understand what he was lacking and why his Divine Object would not respond to him.[1]

Renly introducing himself as an Integrity Knight to the goblins

Renly on an illustration promoting the release of Alicization War of Underworld Episode 07 (Alicization Episode 31).