Rovia (ロービア, Rōbia?) is the main settlement of the 4th Floor of Aincrad.

According to Kirito, Rovia was not a particularly memorable city because of its plain design.[1] The town was located in a squared hollow, all its buildings were made from dull gray stones and had stone-paved streets.[1] The only peculiarity about the town was that the entrance to each house was on the second floor, thus the players had to climb a set of stone stairs to get inside.[1]

In the official service of Sword Art Online, Rovia became a waterway city, the stone used to produce the buildings was changed from a dull gray to a bright white colour and all of its stone-paved streets were filled with water, thus forming canals.[1] According to Kirito, these changes made Rovia look like a city of chalk floating in the middle of a square lake.[1] At nighttime, the city is illuminated by building and gondola lanterns.[1]

The street leading into the town from the north side quickly ended at a dock that was about thirty metres wide and where players needed to board a gondola to travel via the city’s canal system.[1] Rovia also has a southern gate.[2] The town itself is split into four quarters by a cross-shaped main channel.[1] The sides of the twenty-metres wide canal were lined with large and small shops.[1] Each quadrant also had smaller canals that divided it.[1]

Kirito and Asuna first arrived at Rovia at 14:00 on December 21, 2022, about fifty minutes after the defeat of the Nerius the Evil Treant, the boss of the previous floor. The two rented a gondola to reach the Teleport Gate plaza, and activated the Teleport Gate ten minutes later. After observing the rush of tourists from a corner of the plaza and then entered a small inn at the outer edge of the plaza. The two rented a room each and had a conversation before separating for rest.

By the time Kirito woke up three hours later, a particularly long line had been formed at the gondola dock. Looking through the window, Kirito saw a group of five players from the Dragon Knights Brigade led by Hafner pushing their way to the front of the line to get on one of the larger gondolas, despite the protests of the crowd. After observing the scene, Kirito equipped his gear and met with Asuna at the cafe. As the two were about to begin their dinner outside, Argo approached them and, as requested, gave Kirito a map of the floor with the available quests. Comparing the quest list with his beta knowledge, he found that there was one quest that was not present in the beta, and decided that the quest was vital for clearing the floor.

After parting ways with Argo, Kirito and Asuna joined the line for the gondolas, but Kirito suddenly had an idea and decided to rush to the north side of the plaza with Asuna and reach the other bank by jumping on the gondolas, and thus the two reached the north-western quadrant faster. There, the pair rented a gondola and requested to travel to a specific location, the house of Romolo, an NPC quest giver. At the residence, Kirito attempted the usual phrase to start a quest, but as it did not trigger it, he had to look for hints on the proper prompt. After realising that the NPC was a ship builder, Kirito requested the man to build a boat. The man claimed that he was no longer a shipwright, but stated that if they wanted a boat, they would first need to get bear fat to seal the wood against water. Having accepted the first part of the quest, Kirito and Asuna left the house and hailed another gondola to leave the town via the south gate.

The two returned to Rovia several hours later, nearly at midnight, having defeated the Magnatherium and acquired the necessary items for crafting a gondola, thus the two immediately used a gondola to reach Romolo’s house to present the materials to him. After picking the design of their gondola, Romolo went to the workshop to work on the gondola, while Kirito and Asuna decided to wait at his house until it was finished, fearing that they might need to wait if other players began working on the quest. Three hours later, the two were notified of the ship’s completion, and proceeded to the workshop to claim their ship. Having left the workshop with their gondola, the two decided to take a tour of the canals for Kirito to practise controlling the gondola. However, while travelling through the canals, they noticed that the gondoliers began acting strange and that the quest was prompting them to talk to the shipwright again.

After visiting Romolo again and being told to track a boat carrying wooden boxes at nightfall, Kirito and Asuna decided to return to the inn to rest before continuing with the quest, and thus they docked at the west end of the Teleport Gate plaza wharf. Several hours later, while browsing the food carts, the two noticed a commotion at the west of the square and, at the scene, discovered Lind and Kibaou, the leaders of the Dragon Knights Brigade and the Aincrad Liberation Squad respectively, arguing over who had the right to investigate the Tilnel first. Fearing that the two guilds might damage their gondola, Kirito and Asuna decided to force their way through to the gondola and sail off.

As the pair had to wait until the evening to continue with their quest, they decided to head to the southeast quadrant of Rovia to eat. While browsing through the shops, Kirito suggested Asuna to upgrade her armour, and after a discussion, Asuna bought a steel breastplate, a plated leather skirt, as well as studded leather gloves and boots. The two then went to a restaurant to eat before continuing with the quest. After dinner, Kirito sent several messages to Argo with details about the Shipwright of Yore quest that they had acquired while circling around the market district of Rovia. At around 16:30, they spotted the designated boat and followed it out of town through the southern gate. The pair returned to town at about 03:30 the next day, December 24, 2022, and rented a room at a tiny inn in the corner of the south-west section of Rovia.

Starting at 17:00, the Aincrad Liberation Squad and the Dragon Knights Brigade hosted a Christmas party in the Teleport Gate square of Rovia. 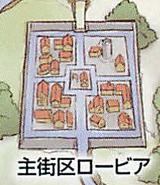 Rovia's appearance on the 4th Floor's map.
Add a photo to this gallery