Rulid Village (ルーリッドの村, Rūriddo no Mura?) is the northernmost village in the Norlangarth North Empire. The closest town to Rulid is Zakkaria,[1] which takes two days to reach on foot.[2] The village has about 300 villagers.[3]

Rulid Village is located on a small elevated hill, surrounded by a grove of trees,[1] near the Edge of the Human Empire and is therefore surrounded by a range of steep mountains from the north, east and west.[4] Because of this, the villagers can only expand their fields to the south, but this direction was blocked off by the Gigas Cedar, which drained the resources of the area in a large field surrounding it.[4] Several forests grow outside of Rulid's fields.[5]

Rulid Village was found sometime between 30 and 97 HEC by a group of pioneers led by Bercouli who led his comrades to the remote regions of the world from Centoria due to their hatred of the Axiom Church's rule. Bercouli became the first chief guard of the village until, at some point after Quinella managed to assume the maximum level of the System Control Authority, he attempted to cross the «Mountain Range at the Edge» and was the first to be abducted by Quinella for her experiments.[6]

In 361 HEC, Kirito was logged into Underworld as a newborn in Rulid, one of the most remote villages that Rath could find. In the same year, Eugeo was born and, until being assigned their Sacred Tasks, both boys spent their time playing with the village chief's daughter, Alice Zuberg. After the two boys reached 10 years of age, they were assigned the Sacred Task of chopping down the Gigas Cedar, however Alice, who was very talented in Sacred Arts was allowed to continue studying at the village's church to improve her knowledge of the Sacred Arts and was thus the only child in Rulid past 10 years old who did not have a Sacred Task.

In 372 HEC, on a hot summer's day, Kirito, Eugeo and Alice decided to go to the «Mountain Range at the Edge» to get some ice to keep the snacks that Alice always brought them cool, so that they would not need to hurry and eat the food before it went bad. The next rest day, the trio set out for the mountains where Alice accidentally broke the Taboo Index by touching the soil of the Dark Territory. The day after the rest day, an Integrity Knight came to the village to apprehend Alice for breaking the Taboo Index. Although Kirito attempted to stop the Integrity Knight, he was held down by the villagers, while Eugeo was unable to take action due to his Seal of the Right Eye. After the incident, Kirito was logged out by Rath with his memories of his life in Rulid suppressed.

6 UW years later, in 378 HEC, Kirito awoke in a forest close to the village with his memories of his real life but no memories of how he ended up in the forest, nor why was he wearing unusual clothing. After pondering about whether he was in the real world or the virtual one and after deciding that he had no way to prove which world he was in, he decided to take action by first finding a source of water. After quenching his thirst, he heard a nostalgic sound coming from upstream and decided to follow it. After arriving at the Gigas Cedar, he found out that the sound was caused by Eugeo chopping down the giant tree. After the two introduced themselves and Kirito found out that Eugeo did not know about the real world, he asked whether there was any village or town nearby he could stay in. After Eugeo was finished with his daily quota with Kirito's help, they headed for Rulid Village.

After reaching the village, they first went through the guard sentry point where they told Jink about Kirito's predicament and that he needed a place to stay, thus he was allowed to enter the village and stay at Sister Azalia's church. After agreeing to meet with Eugeo the next day, he had a meal at the church and, after Selka gave him a pillow and blanket and told him what time was the morning prayer and breakfast, he went to sleep. The next day, after breakfast, Kirito met up with Eugeo and decided to accompany him to his daily task, in hopes of getting Eugeo to lead him to the capital by helping him complete his Sacred Task. After awhile of chatting and completing their day's quota of striking the Gigas Cedar, while trying out the Blue Rose Sword against the tree, they returned back to the village. Back at the village, Kirito asked to speak with Selka and asked her about her sister, Alice. After finishing their conversation about Alice and Eugeo, Selka asked Kirito whether he knew why Alice was taken by an Integrity Knight. After a moment of hesitation, he mentioned that Alice had gone to a certain cave at the Mountain Range at the Edge and touched the soil of the Dark Territory, which was why she was taken away.

The next day was a rest day and Selka decided to use it to go to the cave at the Mountain Range at the Edge. After Kirito found out that Selka was missing, he realized that where she had gone to and told Eugeo about it. The two decided to go after Selka before the villagers found out where she had gone to or before Selka could get into trouble. After a battle with goblins at the North Cave, Kirito, Eugeo and Selka returned to the village with Ugachi's head and told the villagers about what happened at the cave. Afterwards, the villagers started discussing about defending the village and were allowed to take a day off to rest from their adventure. The day after the next day, Kirito and Eugeo returned to chopping the Gigas Cedar, but after the first 1,000 cuts, Kirito decided to try using the Blue Rose Sword against the Gigas Cedar again, due to noticing an increase in his Object Control Authority, and successfully activated a Sword Skill with the sword, greatly surprising Eugeo, who then asked Kirito to teach him how to use his Secret Moves. After 5 days of practicing their skills by using the Gigas Cedar as the target, the giant tree was finally cut down.

That evening, the villagers decided to hold a party to celebrate the event of the Gigas Cedar being cut down 900 years earlier than expected. During the celebration, Eugeo was allowed to choose a new Sacred Task and, after some time of careful thinking, Eugeo decided to be a swordsman. However, although the village chief agreed to allow Eugeo to take up such a Sacred Task, the son of the chief guard, Jink, protested, saying that he should be the one to be granted the right to participate in the Zakkaria Sword Arts Tournament first. In the end, it was decided to settle the issue by allowing Jink and Eugeo to duel, the winner being allowed to be the first to head to Zakkaria for the tournament. During the duel, Eugeo used his Blue Rose Sword and used a skill he learnt on his own, Slant, and easily won the duel.

The next day, before Kirito and Eugeo head out to Zakkaria, Garitta, the previous Gigas Cedar cutter met up with the two swordsmen and asked them to come with him. After reaching the Gigas Cedar, Garitta asked them to cut the branch that received the most blessings from Solus and then told them to bring the branch to an artisan named Sadore in the capital. Afterwards, the two youngsters started their journey to Zakkaria, while, at some point before they left, Charlotte found the two boys and hid in Kirito's hair to observe them on their journey.

Rulid Village and the Gigas Cedar at daytime.

Rulid Village and the Gigas Cedar at night.

Rulid Village in the manga.

One of the moat-crossing points at the village. 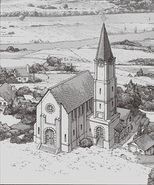 The village church in the manga.

Rulid Village and the Gigas Cedar in the distance from the End Mountain point of view.