Red wings, and styled in red.

The Salamanders (, Saramandā?, lit. "Fire fairy race") are one of the nine races in «ALfheim Online».

Due to their adjacent territories and the competition to gather scarce resources, the Salamanders and the Sylphs have a fierce rivalry to the point that the two races are currently at war.[3] This rivalry further intensified when the Salamanders killed the first Sylph Lord, causing the Sylphs to lose a large amount of money.[2]

At one point, the Salamanders were considered to be the strongest race. However, due to the alliance between the Sylphs and the Cait Siths, the balance of power returned to normal.[2]

Flight: Like all the other races, Salamanders are capable of sprouting wings that allow them to fly. The vibration of their wings is known to produce a sound resembling a metallic roar.[3] However, they are unable to fly underground and inside dungeons.[4]

Fire Magic: Although they are capable of learning and using other types of Magic, Salamanders are the masters of Fire Magic, making them capable of casting fire attribute spells exclusive to their race.[2] 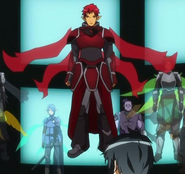 The Salamander Avatar at the character creation screen.

The symbol of the Salamanders in the center of their wings.