Sword Art Online Wiki
Register
Don't have an account?
Sign In
Advertisement
in: Candidates for Revision, Pages to be adopted, Under Construction Articles,
and 4 more
English

The name of this character is alternatively translated as Sheyta (Yen Press).

Alicization Episode 29 (Cameo)
Scheta (シェータ, Shēta?), also known as Scheta Synthesis Twelve (シェータ・シンセシス・トゥエルブ, Shēta Shinseshisu Tuerubu?), was a supporting character in the second half of the Alicization Arc, War of the Underworld. Scheta was one of the Integrity Knight synthesised after winning a Four Empires Unity Tournament.[2] Due to her reluctance to speak and attract attention, she became known as The Silent (無音, Muon?) among the other knights.[2] After killing another Integrity Knight in a duel with her Divine Object-class weapon, the Black Lily Sword, Scheta was put into hibernation at her own request, until she was awoken in the aftermath of the battle at the Central Cathedral that resulted in Supreme Priest Quinella's and Chief Elder Chudelkin's deaths.[2] 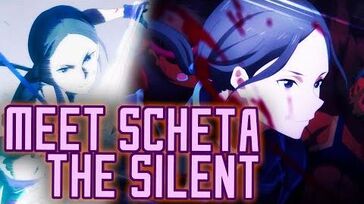 Scheta was a tall and awfully slender woman who looked to be about twenty years old by outward appearance.[2] Her long, straight,[2] dark-gray hair parted neatly at the middle of her pale brow[1] in a way that it looked artificially plastered on her head[2], ending at the back of her head in a tight ponytail.[1][2] She had refined, almond-shaped eyes with single-edged eyelids, while her lips lacked any rogue.[1] Her refined, cool, neat and tidy face that seemed as if it were sculpted with a small, sharp knife showed not a shred of emotion most of the time.[2] Unusually for an Integrity Knight, she wore plain,[2] thin, matte-gray armour.[1] She also wore a paper-thin pitch-black rapier[2] on the left side of her waist.[1]

Scheta was a woman possessed by a subconscious desire to slice things in half, although she herself hated and always attempted to suppress this nature of hers, regarding it as sinister. Despite her desire to restrain her dark impulses, Scheta would be unable to resist temptations if pressed with them, such as when Quinella promised to make a sword that could cut anything in half. Due to her potential of killing even the most skilled opponents, Scheta seldom spoke and suppressed the sense of her own existence for hundreds of years of her life in the Central Cathedral to avoid being challenged to a sparring match. Even in battle, Scheta emits not a shred of hostility of murderous intent, despite unilaterally slaughtering her opponents.[2]

Scheta was a swordswoman who had earned the right to participate in the Four Empires Unity Tournament. She had a strong tendency to visualise the cleanly-sliced cross section of anything she had encountered and was unable to stop herself from making this image of hers a reality, regardless of whether her target was an inanimate object, or a person. Because of this, she had brutally murdered every single one of her opponents during the tournament. Although Scheta was declared the victor of the tournament and became an Integrity Knight in the aftermath, the records of that year's tournament were completely erased to hide the fact that blood had been shed throughout it.[2]

Scheta's deeply hidden nature was perceived by the supreme priest of the Axiom Church, Quinella, who promised to craft her a sword that could cut anything in half if she were to find and bring to the church any being that survived in the battlefield of the Age of Blood and Iron in the Dark Territory, making it engorged with Spatial Energy. After three days of searching, Scheta was able to find a single black lily, which Quinella later turned into an extremely thin sword for her. A year later, Scheta was put into hibernation at her own request after killing another Integrity Knight in a duel.[2]