Selmburg (セルムブルグ, Serumuburugu?) is a beautiful castle city island and the main settlement of the 61st Floor of Aincrad in Sword Art Online. The houses in this city are extremely expensive.

Selmburg is a castle city located on a mountainous island in the middle of the lake of the floor. While viewing the castle from the outside, a white granite surface with serene spires at its center can be seen. It has green foliage throughout the city and a lake surrounding it, making it extremely beautiful when the sun shines upon it.[1]

On October 17, 2024, Kirito arrived at this floor trailing Asuna, having been invited for a dinner at her house with the S-rank Ragout Rabbit's Meat he had caught earlier. After finishing dinner, Kirito and Asuna talked about the real world and they discussed forming a party, which Kirito finally agreed to under pressure from Asuna. As Kirito did not know how long he could stay at her house without being rude, he left for his house and met her the next day to party with her.

Six days later on October 23, Kirito and Asuna returned to her house after a tragic incident within the guild. Kirito requested to stay at her house for the night, which she allowed. While in bed, Kirito asked Asuna if they wanted to get married, to which Asuna smiled and affirmed. The newlyweds went to buy a house on the 22nd Floor. At first, Asuna offered to sell her house, but Kirito voted against the idea, instead collecting all their rare items and selling them to Agil to collect the Cor needed for the new house.

The city of Selmburg from a distance. 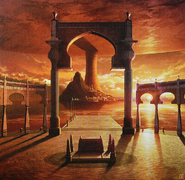 Concept art of Asuna's home in Selmburg from the Design Works artbook.

Concept art for Asuna's home's other rooms from the Design Works art book.

Concept art for the rooms of Asuna's home from the Design Works art book.
Add a photo to this gallery