The name of this player is incorrectly translated as Zexceed (Crunchyroll, Yen Press).

In the real world, Tamotsu had long, unkempt hair, heavy fat around his neck and cheeks, and wore silver-rimmed glasses.[3]

Tamostu's avatar XeXeeD had messy,[4] silvery-blue hair[5] with long forelocks. He wore a pair of sun glasses, an earring in his left ear, a fancy, white costume which was blue around the pelvis area, and blue gloves with extended cuffs that covered a part of his forearm.[4]

XeXeeD was a deceitful and cunning person, as he spread false rumours about AGI-build avatars being the best, even though he knew himself that STR-build avatars would have an advantage in the long term, thus misleading players and weakening his competition. He was also an overconfident person, as he believed that he could repeat his success in the future with the same strategy.

XeXeeD was the winner of the «2nd Bullet of Bullets» tournament, which he won due to his extremely rare gun,[6] the XM29 assault rifle,[7] and defence equipment.[6] Another factor that contributed to his win was that, right before the tournament, he spread misinformation about stat allocation to other players, specifically about AGI being the best build, while, later on in the game, a STR-VIT build proved to be better. He also opted to take a life sized model of a GGO gun as his prize for winning the BoB instead of in-game currency. This eventually caused him to become one of Death Gun's targets. One of the reasons of him being chosen as the first target was also due to his misinformation on stat allocation, which caused an AGI-build Spiegel to be unable to keep up with STR builds and be unable to earn his monthly connection fee.

On November 9, 2025, XeXeeD took part in MMO Stream's «This Week's Winners» with his Gun Gale Online avatar as the winner of the 2nd Bullet of Bullets Tournament. During the broadcast, he discussed the optimal character build for the game with Yamikaze, who took the 2nd place in the tournament. At around 23:30, in a bar in Gun Gale Online, Sterben, controlled by Shinkawa Kyouji, shot an image of XeXeeD on a TV in the bar. Seconds later, XeXeeD's voice froze and he tried to weakly grasp the center of his chest. Moments later, XeXeeD was disconnected from the show. Several days later, on November 14, 2025, the corpse of Shigemura Tamotsu was found. After an autopsy, the cause of death was determined to be the result of heart failure.

It was revealed later that one of the members of «Death Gun» injected succinylcholine into Tamotsu's body at the time Sterben shot the image of XeXeeD in the bar. The drug caused Tamotsu's heart to stop which resulted in his death. It was also revealed that Kyouji was the one to use Sterben, to shoot XeXeeD in the virtual reality. 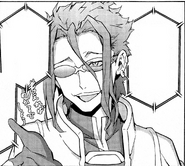 XeXeeD in the Phantom Bullet manga. 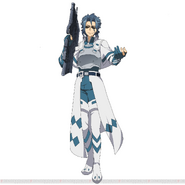