Sword Art Online Wiki
Register
Don't have an account?
Sign In
Advertisement
in: Candidates for Revision, Pages to be adopted, Under Construction Articles,
and 5 more

Yuna redirects here. You may be looking for the AI idol.

Millennium Twilight
Shigemura Yuuna (, Shigemura Yuuna?), known as Yuna (ユナ, Yuna?) in Sword Art Online, was one of the main characters of Ordinal Scale and the Ordinal Scale side story, Hopeful Chant. She was the daughter of Professor Shigemura Tetsuhiro, the childhood friend of Nochizawa Eiji (Nautilus, Eiji), and was one of the 10,000 players who were trapped in Sword Art Online, where she became known as the Song Enchanter (歌エンチャンター) or Utachan (歌チャン or ウタちゃん, Uta chan?) due to singing in the Teleport Gate plazas of Aincrad's main towns, as well as having the Chant Extra Skill.[5] She was killed in battle in a field dungeon on the 40th Floor of Aincrad by a group of tormentor-class minions of the Feral Warder Chief that she had drawn to herself to protect her party from being annihilated. 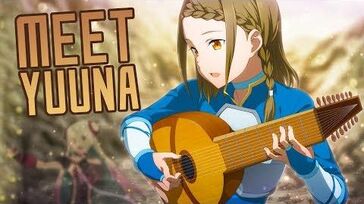 Yuuna had rather short hair, which she had dyed milk-tea-brown using a rare dye.[6] When trying to stay inconspicuous in town in Sword Art Online, she wore a white hood with a plain, deep-red tunic.[7] However, her main apparel was a vivid royal-blue one-piece dress with golden frills and buckle, indicating the rarity and high defence value of her cloth armour.[7] Her outfit was supplemented with a pure white cape and lute, a pure white feathered hat on her head, and a dagger on her right waist, giving her the image of a troubadour.[7]

Yuuna was an obedient, yet strong-willed girl.[6] Despite her own desires, she did not openly oppose her father's wishes, such as sharing her interest in singing with him, yet continued developing her skills nonetheless.[6] Yuna was also skilled at reading and improving the mood, such as easily noticing when Nautilus was depressed and helping him regain his good mood with candy and encouragement,[6][7] or sensing when her party members were filled with doubt and restoring their resolution with one of her songs.[7] According to Nautilus, her potential at encouraging others, give them hope, and lead them was on the same level or even higher than Asuna's.[7] Additionally, Yuna had a strong resolution to help others, even at the cost of her life, such as when she went outside the safe zone to quickly raise her level in order to join the Clearers to assist in clearing the game, or when she instantly decided to sacrifice herself to save her party members from being annihilated.[7]

Ever since childhood, Yuuna had been learning to play the piano and classical guitar. Yuuna herself preferred singing, especially pop or anime songs, but she lacked the resolve to speak with her father about this preference, as he was strict and only allowed her to play classical music.[6]

Yuuna went to the same kindergarten, elementary school, and middle school as Nochizawa Eiji, but then moved to an all-girls high school. During her high school years, Yuuna accepted Eiji's invitation to play Sword Art Online with him, showing interest in the musical skills present in Sword Art Online. Although the two did not manage to get a copy of Sword Art Online from the stores, they were provided two copies of the game by Yuuna's father, who used his connections with Kayaba Akihiko to obtain them.[6]

On November 6, 2022, the day the official service of the game began, Yuuna logged into the game as Yuna, along with Eiji, who named himself Nautilus, only to discover that Kayaba Akihiko had turned it into a death game.[6] At first, Yuna listened to Nautilus's request to remain in town, where it was safe, but at some point, she acquired the Dagger skill and ventured into the Outer Field to earn experience and money.[6] Her resolve to help clearing the game was so strong that she had soon reached a level close to that of the Clearers at the time, a feat that required a lot of effort.[7]

On October 15, 2023, Yuna came to Jaileum, the main town of the 40th Floor of Aincrad, to meet with Nautilus, who she had not seen in a few days. As Nautilus was depressed due to his failure that day, Yuna gave him a candy and attempted to brighten his mood. To this end, she took him to a nearby orchestra, where she began singing. Upon finishing her song and noticing all the players in the plaza having listened to it, Yuna immediately pulled Nautilus with her into an empty corner of the back lanes in the town due to feeling too much pressure from the attention. During a conversation with Nautilus that followed, Yuna revealed her desire to help the clearers on the front lines. Later that night, Yuna came to Nolfret, the main town of the 39th Floor of Aincrad, to practice her singing, where she was found by Asuna. Before Asuna could speak to her, Yuna immediately disappeared into the nearby Teleport Gate upon finishing her songs.

On October 18, 2023, as Nautilus had not been responding to her messages for a couple of days, Yuna found him wearing a disguise in Jaileum in a poor attempt to be unrecognised. Realising that Nautilus had not been allowed to the boss battle based on his appearance, she suggested going for a meal at a restaurant at town. At the restaurant, as they were talking about Yuna's desire to join the Clearers, they suddenly heard another player asking for help. Upon the player revealing that his party members were trapped in a field dungeon, a rescue party was formed, with Yuna, filled with resolution, deciding to join it.

At the field dungeon, the group found the endangered party members in a cell with infinitely respawning monsters attacking them, and the dungeon boss, the Feral Warder Chief, guarding the lever to open the cell. As activating the lever would require the players to come within the boss's range, thus causing it to engage them, while it was unlikely to get the entire group out of the room safely before the doors closed again, it was proposed to defeat the boss instead of retreating. While the other players wavered on the course of action, Yuna had the endangered players come close to the door to sing a song that would heal them. Yuna's song gave the players the strength to execute the plan, and thus the boss battle began.

During the battle, Yuna helped attack the boss from the sides while the highest-leveled players kept the attention of the boss on themselves. Although the battle proceeded smoothly for the next eight minutes, when the boss's Hit Point gauge was lowered to the red zone of its last bar, about fifteen extra minions descended on the boss room from holes in the walls, while the boss executed an usual area of effect attack during the distraction. Thus, the majority of players engaging the boss suffered paralysis, while the players engaging the minions were soon overwhelmed. At that moment, Yuna, the only unparalysed damage dealer, sung a special song that drew the attention of all the minions onto her. By running around the room with the minions in pursuit, Yuna was able to give the others enough time to defeat the boss, but was killed by the minions the moment the boss was vanquished.