SII Episode 17
Skuld (スクルド, Sukurudo?) is one of the NPCs that are part of «The Holy Sword of the Ice Palace» quest.

Unlike her sisters, Skuld wears armour and a helmet, with wings stretching out of both her helmet and boots.[1] She wears bluish green clothes underneath her armour.[1] Her golden hair is tied finely and she has a beautiful and brave-looking face, as well as a cold and dignified voice.[1] Additionally, unlike her sisters, Skuld is about as tall as a fairy, or half the size of her elder sister Urðr.[1]

Skuld was created by the Cardinal System’s Automated Quest Generation function, which based the character on a myth from Norse mythology. Unlike most quest NPCs, Skuld's core programming is connected to the language engine module, therefore, instead of having a fixed response routine, she has a certain level of Artificial Intelligence and is thus capable of much more flexibility in her dialogue routines as well as sounding far more realistic than a regular NPC.

After Asuna, Kirito, Klein, Leafa, Lisbeth, Silica, and Sinon completed «The Holy Sword of the Ice Palace» quest by retrieving Excalibur from the plinth of Thrymheim, thus returning Jötunheimr to its former flourishing state, Skuld, along with Urðr and Verðandi, came to reward the fairies for their help. As the three sisters were about to leave, Klein suddenly jumped up and asked Skuld for her contact address. While her sisters continued to disappear, Skuld herself turned around and made an amused face, after which she waved her hand again and sent something glittering to Klein. Afterwards, Skuld followed her sisters and disappeared from the view of the fairies. 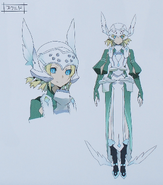