Sword Art Online Wiki
Register
Don't have an account?
Sign In
Advertisement
in: Pages to be adopted, Under Construction Articles, Characters,
and 2 more
English

Alicization Episode 07
Sortiliena Serlut (ソルティリーナ・セルルト, Sorutirīna Seruruto?) is a supporting character in the Alicization Arc. She was the mentor of Kirito during his first year in the «North Centoria Imperial Sword Mastery Academy», and the second-seat elite swordswoman at the Academy, where she was known as the «Walking Tactics Manual» (歩く戦術総覧, Aruku Senjutsu Souran?). She graduated as the first-ranked swordsman from the academy after defeating the first-seat swordsman Volo Levantein during the graduation tournament and participated in the Norlangarth North Empire Swordsmanship Tournament, where she was defeated by Eldrie Woolsburg. 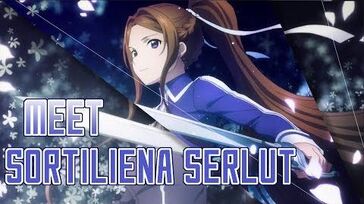 Sortiliena has very long[2], straight[3], dark brown hair tied in a ponytail with a lilac ribbon, and navy blue eyes that resemble a sky fading into twilight.[4] As an elite-swordswoman, she wore a neat, purple jacket and a purple long skirt.[4]

On the 6th Day of the 3rd Month 380 HEC, during a late practice with her valet Kirito, Sortiliena conversed with the boy about how much he had improved since his enrollment. At the end of the match, Sortiliena was promised that the boy would show her his true skill the next day, as a graduation present.

The next day, Sortiliena discovered that Kirito was with Volo Levantein. When she arrived at the scene, she was informed that they were planning to spar as a punishment for Kirito. As she was unable to do anything to stop the sparring, she wished luck to Kirito and watched the match. After the battle, she congratulated Kirito for his performance against Volo and invited him, along with Eugeo and Golgorosso Balto, to her room to celebrate.

During the last tournament before the graduation, Sortiliena finally defeated Volo by having her Secret Move «Whirling Current» pushed back by Volo's skill to its pre-motion stance, causing the skill to re-activate and deal a second hit. This was a technique that she mastered in just half a month after seeing Kirito's battle with Volo. By defeating Volo, Sortiliena graduated as the top student from the «North Centoria Imperial Sword Mastery Academy». Two weeks after her graduation, she participated in the «Empire Swordsmanship Tournament», where she lost against Eldrie Woolsburg, who cut her whip and sent her sword flying.