The city is easily recognizable by the dazzling and gigantic «Tower of the Wind» (風の塔, Kaze no Tō?), the symbol of Swilvane, at the city's center. Behind the Tower lies the «Lord's Mansion», where the current Lord (or Lady) of the Sylphs resides. Leafa believes that the mansion is the most superior building in all of Alfheim.

The city itself lives up to its name as the «Emerald Capital»: spires of varying green shades rise along a complex airy corridors which connect the streets. Bursting out of each tower is a brilliant dark green light that gives the city an impression of a fantasy kingdom. Kirito describes the city as "beautiful".

Tower of the Wind up-close.

Lily of the Valley Pavilion at night.

Swilvane from a distance at daytime.

Lily of the Valley Pavilion at daytime.

Tower of the Wind up-close at daytime.

Swilvane in the Fairy Dance manga. 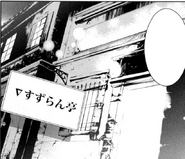 Lily of the Valley Pavilion in the Fairy Dance manga.

The Lord's Manor and the Tower of Wind in the Fairy Dance manga.

Concept art for Swilvane from the Design Works artbook.

Concept art for the Lily of the Valley Pavilion from the Design Works artbook.