On January 18, 2026; in one of the desert fields in Gun Gale Online, two female players were waiting for a monster to fall into their trap when one of them, a woman dressed in black named Pitohui, asked the other, a short girl dressed entirely in pink named LLENN, if she had heard about a tournament called Squad Jam. However, LLENN mistook the word "squad" for "squid" and began talking about food, initiating a conversation about various topics.

As their casual conversation continued, they suddenly heard an explosion and halted their idle chat. A giant earthworm fell into their trap, thus the two jumped out of the shade of a rock and prepared to attack the monster. While Pitohui provided supporting fire, LLENN charged towards it and soon opened fire on the monster with her P90. Pitohui noticed that the monster was about to use a tail attack and warned LLENN about it. However, LLENN continued charging, grabbed a new magazine, and jumped as the monster was about to hit her. She reloaded her weapon in midair and, just as she landed, fired at the earthworm in rapid fire, killing it.

After the battle, Pitohui asked what they were talking about while they were waiting for the ambush, and LLENN responded that they had been talking about squids and tournaments. Pitohui corrected her by saying that she meant squads and explained what the word meant. Pitohui then explained that a Squad Jam was a group battle royale tournament in Gun Gale Online.

Karen was born as the youngest child of a family of five children and, surprisingly, grew far taller than the average child would. After finishing secondary education, Karen tried her luck by taking examinations at a prestigious university for girls in Tokyo and, unexpectedly, was accepted to the university. Karen thus borrowed a room from one of her elder sisters and began her solitary life in Tokyo, hoping that something would change. However, her wish did not come true.

One day, while visiting her parents, Karen came across an article about virtual games. Although the author of the article had a strong opinion against such games, the mention of the games allowing the player to experience an alternative self caught Karen's curiosity. Thus, Karen contacted one of her close friends from her home town who was playing a game.

The friend, named Miyu, was pleasantly surprised about Karen's new interest and she taught Karen what she needed to know. Karen decided to play the game that Miyu was playing - ALfheim Online, but as soon as she saw how tall her Sylph avatar was, the AmuSphere forcedly logged her out due to her abnormal heart rate.

As Karen no longer wanted to play ALfheim Online, but had already created a character, Miyu advised Karen to use The Seed's conversion option to transfer her character to another game that was based on The Seed. Thus, Karen began trying out a variety of games that had a free trial until she found a game that gave her a very short avatar. The game she found was Gun Gale Online.

For three months, Karen only logged in to Gun Gale Online to enjoy her short avatar. But eventually, LLENN began to hunt monsters. One day, while waiting for a monster to trigger her trap, LLENN noticed that three men were walking towards her. As it was normal for players who meet in the field to attack each other unless they were acquaintances, LLENN worriedly considered her course of action. As the men came closer, LLENN realised that they were unaware of her presence.

As soon as the men were only ten metres away from LLENN, the monster that LLENN was hunting triggered her trap and caused an explosion. The men, startled by the explosion, began to panic and LLENN used the opportunity to attack them. To her surprise, she killed the men without them noticing her. She soon realised that her pink equipment easily blended in with the environment, explaining why none of the men noticed her.

From then on, LLENN became addicted to the thrill of ambushing players, thus, although she continued to hunt monsters, if she noticed some players heading towards her, she would ambush them instead. Eventually, LLENN discovered that some players were annoyed by her ambushes and had begun forming a subjugation party to identify her. Feeling guilty, LLENN stopped ambushing players and decided to only hunt monsters.

One day, a female player approached LLENN as she was window shopping, and offered to treat her to some tea. The two went to a restaurant where they had a friendly conversation over tea and cake, and listed each other as friends. After they finished the tea and cake, LLENN revealed that she was looking to buy a new gun, and Pitohui decided to show her to a good shop that she knew of. In the shop, Pitohui recommended a P90, which immediately captivated LLENN, and she decided to buy it despite its high price.

The two formed a squadron and began hunting monsters together. Due to Pitohui's interest in guns, she would always bring a different gun each time they met and would often talk about them. Though, as LLENN did not know much about Pitohui, she decided to ask Pitohui about her hobbies on one occasion. As this led to an awkward situation, LLENN attempted to change the topic, but Pitohui decided to suggest meeting in real life if LLENN managed to beat her in a fight, and made LLENN promise that she one day would do so.

Back on January 18, 2026, Pitohui and LLENN continued their conversation about the Squad Jam tournament. Pitohui explained that the tournament was hosted due to the request and sponsorship of a novelist who enjoyed watching Kirito and Sinon fight as a team during the third Bullet of Bullets. Pitohui then told LLENN that she should participate in the tournament, but Pitohui also revealed that she herself would not be able to participate, thus she offered to contact an acquaintance of hers to participate in her place. As LLENN was reluctant to join the tournament, Pitohui explained that the tournament would give her the opportunity to vent her emotions and told LLENN to make a decision by Wednesday.

In the real world, Karen contemplated whether she should continue playing Gun Gale Online and participate in the Squad Jam tournament, or use the opportunity to quit the game before it became too hard to do so. Unable to reach a decision, Karen decided to consult her friend Miyu and was advised to use a coin toss to decide if she was equally split between the two options. Miyu also reminded Karen that they had been planning to go to Kanzaki Elza's concert if Miyu got the tickets, and as the odds of that happening were fifty-fifty, Karen decided to have that serve as the coin toss for her decision.

January 27, 2026, just one day before the registration deadline for the Squad Jam tournament, was the day that Karen would know the results of Miyu’s efforts. As she was walking home from university, Karen passed by six girls from an attached high school, when one of them suddenly spoke to her and commented about her height. Enraged, Karen rushed home, where she received a message from Miyu that she was unable to get the tickets. Karen then immediately messaged Pitohui that she would take part in the tournament.

On January 30, 2026, Karen logged into Gun Gale Online and met up with Pitohui at a bar in SBC Glocken. Pitohui's acquaintance was still busy with real life affairs, thus the two girls talked about the tournament and its rules while they waited. Once they were done, Pitohui revealed that LLENN would be designated as the leader of their team, shocking LLENN. At that moment, Pitohui's acquaintance stepped into the room.

SECT.5 - The Beginning of the Tournament[]

SECT.6 - The Beginning of the Battle[] 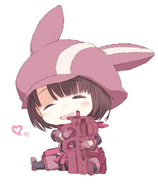