All of a sudden, the 2nd Squad Jam (SJ) was announced to all players in Gun Gale Online. Although the victor of the first tournament, LLENN (Kohiruimaki Karen), heard the notification, she did not really feel interested in it.

However, a mysterious stalker crept up on Karen and told her that people would die on the night of the 2nd Squad Jam. The man claimed that the "worst case" could only be avoided by defeating Pitohui, who would be participating in the tournament. After much anguish, Karen decided to participate in the tournament, but......

On March 16, 2026, nineteen days before the 2nd Squad Jam, Kohiruimaki Karen was cornered by a man, who had slammed his right hand on the wall beside her left ear. When Karen thought that her situation was reminiscent of a shoujo manga trope, the man, a little shorter than her, suddenly asked whether she had ever seriously loved someone to the point she would be willing to devote her life to them. After she declined, the man exclaimed that she absolutely did not understand how he felt, confusing Karen as a result.

Two days after the end of the first Squad Jam, Karen met and befriended the members of SHINC. They were revealed to be a group of girls from the rhythmic gymnastics club at a school affiliated with Karen's university. Since then, the girls began chatting whenever they crossed paths. Each of their chats became longer than the previous, despite them having a busy schedule at the time. Thus one day, Karen invited the girls to her apartment. At her apartment, the girls decided to watch the recording of the first Squad Jam. Her new friends were especially amazed at her trap using a suitcase to ambush an enemy team, resulting in them watching the scene over and over again. Karen attributed her skills to her avatar LLENN, but was immediately told that it was the player who controlled the avatar, therefore LLENN and Karen were the same person.

The next highlight of the replay was the scene where SHINC arrived at a mansion by truck and the girls took the opportunity to introduce their avatars to Karen, as well as comment on their appearance. At the end of the introduction, Karen asked again if they had to watch the decisive battle, as she was reluctant to do so. Saki's group confirmed this in unison. When Karen remarked in surprise about how serious they were about the matter, Saki responded that it was part of their club activities. She explained that the rhythmic gymnastics club had an awful teamwork at first, thus they decided to play games together to try and resolve this issue. Although the first games they tried yielded no results, they eventually discovered Gun Gale Online. The girls became so engrossed in it that they managed to become good friends, as well as form their squadron, «SHINC». After Saki finished her explanation, the girls managed to persuade Karen to give a harsh commentary on their battle.

Once the girls finished watching the battle, Saki enquired whether Karen would participate if a second Squad Jam was held. After pondering for a while, Karen responded that the chances of her participating would be low, unless something extraordinary happened. The conversation afterwards went from real life topics to GGO topics back to real life topics and so forth, with Karen even telling the girls about her height complex and showing her P90 model to them. Before parting, Saki admitted that she really wanted Karen to participate in a second Squad Jam.

SECT.5 - The Beginning of the Tournament[] 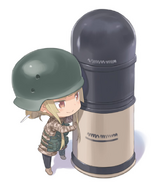