SECT.11 - There Is Still Time Battle - The First

SECT.12 - There Is Still Time Battle - The Second

SECT.16 - This Last Battle of Ours

SECT.18 - Their Respective Endings and Beginnings 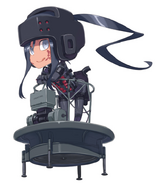