Seeking marriage with Kohiruimaki Karen, the real life identity of LLENN, Fire, also known as Nishiyama Da-Fire, tempted LLENN to turn the 4th Squad Jam into a battle for "the right to date her in the pursuit of a marriage".

Desiring to win against LLENN by any means necessary, Fire succeeded in assimilating Boss's SHINC squad into an alliance against LPFM――

Having gone through a grand "high-speed battle" against MMTM, LLENN's team finally met SHINC on the battlefield, but at that moment, the teams affiliated with Fire suddenly appeared...... 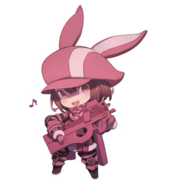