Alicization Exploding (アリシゼーション・エクスプローディング, Arishizēshon Ekusupurōdingu?) is the 16th book in the Sword Art Online Light Novel series, published on August 8, 2015. It is the second volume in the War of the Underworld sub-arc of the Alicization arc. 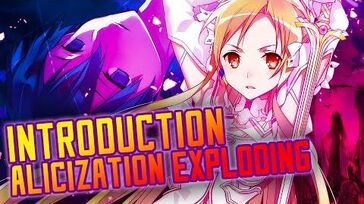 Half a year has past since the grandest battle in the history of the Human Empire that unfolded at the top floor of the Central Cathedral ―― Kirito and Eugeo's battle to the death with the highest minister Administrator. The peace that came in exchange for Kirito's heart and Eugeo's life did not continue for long.

The Eleventh month of the Human Empire Calendar, 380. The curtain for the «Final Load Test» that will engulf the entire Underworld in chaos has been raised. The «East Gate» that separated the Human Empire and Dark Territory collapses and the dreadful «forces of darkness» begin their invasion. Opposing the invading army of 50,000 led by Darkness God Vecta/Gabriel Miller is the Human Empire Defence Army of 3,000 led by the integrity knight Bercouli. The 《Frost Scale Whip》 Eldrie, the sub-leader 《Conflagrant Flame Bow》 Deusolbert, 《Heaven Piercing Sword》 Fanatio and other integrity knights continue their struggle to reverse their numerical inferiority, but...

By using trickery, the enemy vanguard mountain goblin race slips through the line of defence and aims for supply force in the rear. A crisis is drawing near female trainees Ronye and Tiese who are protecting the mind and body of the broken Kirito.

Furthermore, the cunning darkness magician guild leader of the invading army Dee Ai El is plotting the extermination of the defence army with a dreadful, large-scale art. The plan that the opposing defence army's supreme commander, integrity knight Bercouli came up with is――！And, the whereabouts of Asuna, who logged into Underworld from the real world are――

Chapter 18 - The War of the Underworld

As the East Gate fell and the attacking army from the Dark Territory began their assault, the Integrity Knights were conflicted by not only the massive army, but their own struggles as well. Meanwhile, Ronye and Tiese struggled to find safety and to care for Kirito's broken state.

From a portable terminal that Asuna brought to the Ocean Turtle with her, Yui intercepted Critter's cover website and transferred herself back to Japan after failing to notify Asuna. She called several people at the same time. The first was Asada Shino, who was woken up while it was still dark outside, and jerked out of bed by Yui's alarmed voice. The second was Kazuto's sister, Suguha, who sneaked out of the house to travel to the Rath Roppongi branch by taxi.

Back in the Ocean Turtle, ten hours had passed since Asuna dived in. Ten hours remained before the Aegis destroyer "Nagato" stormed the megafloat. Suddenly, the telephone rang, and Kikuoka Seijirou answered it, only to discover that it was a technician from the Rath Roppongi branch. The tech informed Kikuoka that two high school girls - Shino and Suguha - had appeared at their site and requested to pass a message to him. The message encouraged him to confirm the Underworld FLA rate immediately. Surprised that an outsider would know such terms, Higa Takeru operated the console and discovered that it was decreased to 1.00 without anyone's knowledge.

After Shino and Suguha were allowed into Rath's branch office, Yui traveled into ALfheim Online, where she gathered the rest of the gang: Silica, Lisbeth, Klein, and Agil. She informed them of Kirito and Asuna's situation, and the American attackers. In her effort to convince them, she began weeping involuntarily, despite the fact that she was a Top-Down AI with no emotions. They agreed to help, and began brainstorming solutions to obstacles such as time and strength difference, but failed to come up with anything substantial. Yui broke the silence by revealing a final means that carried a great sacrifice: to convert their, along with many other VRMMO players', existing accounts into the Underworld. 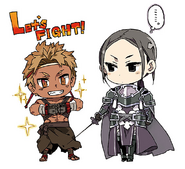