Moon Cradle (ムーン・クレイドル, Mūn Kureidoru?) is the 19th book in the Sword Art Online light novel series, published on February 10, 2017. It is a side story that takes place before the end of the Alicization Arc. 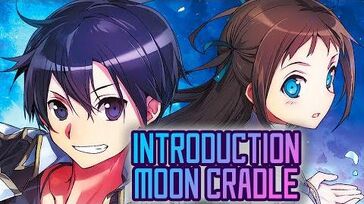 Some time after the War of Underworld, Underworld entered a state of peace. The people of the Human Empire and the Dark Territory, the Goblins, Orcs, Ogres, and Giants all signed a peace treaty and the Dark Territory and the Human Empire opened up for trade and travel. After the Rebellion of the Four Empires, the four Imperial Noble Families, together with the entire noble system, had been overthrown. The Underworld Fundamental Law was introduced and the Taboo Index revised. The Integrity Knights were becoming the largest fighting force in all of Underworld. Ronye and Tiese became Integrity Knight Apprentices, along with their dragons Tsukigake and Shimosaki.

Kirito became the Representative Swordsman and de facto leader of the Human Empire Unity Council. He engrossed himself in the research and examination of his new creation, the «Mechanical Dragon». After a failed public experiment, Kirito revealed to Ronye that the «Mechanical Dragon» research was currently his highest priority as it was very likely for the imbalanced resource distribution between Human Empire and Dark Territory to cause another war. If the invention of the «Mechanical Dragon» would be successful, it might be able to cross the Mountain Range at the Edge, allowing the races of the Dark Territory real countries to live in, as their current territories were just stretch of barren land.

On the 18th day of the 2nd month of the Human Empire Calendar 382, a Centoria resident was killed, with a goblin visitor suspected to be the murderer. All visitors were required to agree on a set of rules before they were allowed to enter the Human Empire, which included a ban on murder. As the suspect's right eye still remained intact, indicating that the goblin did not violate the Seal on the Right Eye, Kirito and other members of the Council concluded that the goblin did not violate the rule and thus had not killed the Centoria resident. With no other suspects being identified and no apparent cause that could lead to killing of that Centoria resident was unveiled, Kirito and other members of the councils worried about the possibility that unidentified rebellion forces or Dark Sorceresses were behind the case to plot another great war. Kirito decided to head to Obsidia, the Dark Territory's Capital to meet with Iskahn, the leader of the Dark Territory Inter-racial Council, to reach an agreement as soon as possible.

But as Obsidia is more than 3000 km away from Centoria, it would take 3 days for dragons and a month for to complete the trip. Kirito decided to use the second Mechanical Dragon to fly to Obsidia since the situation was pressing and the Integrity Knights were too busy to help. But as Ronye was worried about the safety and the possibility that the event was setup as a trap to attempt assassinate Kirito, Ronye nominated herself to be a guard for Kirito.

Afterwards, Ronye met Asuna, who then led Ronye to the weaponry to take a sword to guard Kirito. While Ronye was choosing a sword from several swords that was presented to her, she recalled Eugeo's description on the relationship between a swordsman and his sword, which was summarized as love toward sword. As Ronye mindlessly extended her hand, a sword with handle as black as Kirito's hair and soft silvery gloos pommel and ring caught Ronye's hand. After then, Asuna asked Ronye to take care of Kirito and told her to flee when Kirito told her to do so, and told her that she can't go with Kirito as she must remain to resolve dissatisfaction against the Human Empire Unity Council.

After giving her original sword to Asuna to be returned to Human Army, Ronye head to her own room and decided to take a bath at 90th Floor of Central Cathedral before the next day's long trip. In the bath, Ronye met Fizel, who had been bestowed as an official Integrity Knight. Then Fizel warned Ronye about the danger of Dark Territory as Dark Territory was still under Rule of Force and does not have Fundamental law and Taboo Index. 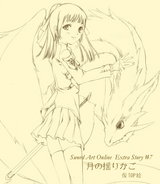 Cover for the web version of the story. 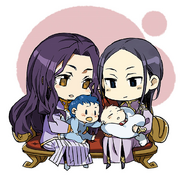