Unital Ring II (ユナイタル・リングＩＩ, Yunaitaru Ringu II?) is the 23rd book in the Sword Art Online light novel series, published on December 10, 2019. It is the second volume in the Unital Ring Arc.

Around the time Kirito, Asuna, and Alice had their accounts forcibly converted to the mysterious VRMMO game named《Unital Ring》. Sinon was also summoned to the exact same world.

Driven into a predicament — lacking her friends, her equipment, and barely having any 《Thirst Points》 left — as a result of multiple mistakes, Sinon takes on a boss monster, her life on the line.

Meanwhile, Kirito and co divide their forces into a group for protecting their home, and a search party for Sinon. Yet, ahead of them lie a disastrous natural phenomenon, a powerful monster, and an assailant who is after Kirito and co―― 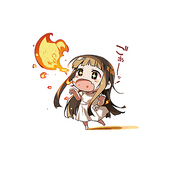 Chibi illustration.
Add a photo to this gallery

Retrieved from "https://swordartonline.fandom.com/wiki/Sword_Art_Online_Light_Novel_Volume_23?oldid=170537"
Community content is available under CC-BY-SA unless otherwise noted.