The key to clearing the 7th Floor is an all-in showdown at the 《Monster Arena》!?

The long-standing, behind-the-scenes feud between House Nactoy and House Korloy that control the casino on the 7th Floor takes an unforeseen turn due to an intervention by Kirito and Asuna.

Kirito attempts to expose the cheating conducted by House Korloy, who have begun dominating the 《Monster Arena》. Yet extra traps have been laid at the arena.

Taking back the 《Keys》, vanquishing the Floor Boss, and stopping the unscrupulous machinations of House Korloy——. Only two days left to deal with all these numerous challenges. This high-difficulty quest leads to wagering everything one owns in an all-in showdown at the Monster Arena.

"No worries, it'll all work out, Kirito-kun."

Will Kirito and co be able to get through the multitude of traps that await them, and grab hold onto victory?[1]

Rhapsody of the Red Blaze (II/II)[] 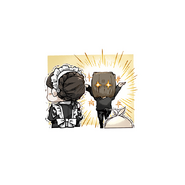