The Sylphs (, Shirufu?, lit. Wind fairy family) are one of the nine races in «ALfheim Online».

Sylphs originate from Swilvane, a city located in the south west and situated near the «Ancient Forest». It is bordered by the Salamander territory on the east and the Cait Sith territory on the north.

Due to their adjacent territories and the competition to gather scarce resources, the Sylphs and the Salamanders have a fierce rivalry to the point that the two races are currently at war.[1] This rivalry further intensified when the first Sylph Lord was killed by the Salamanders, causing the Sylphs to lose a large amount of money.[2]

On the other hand, the Sylph are on good terms with the Cait Siths who always provided tamed monsters to the Sylph capital. At one point, they made a treaty and joined forces to attack the World Tree. Though only one race could attain the promised unlimited flight of the Alfs, the two races promised to assist the other race in the next Grand Quest.[2]

The Sylphs are typically associated with the color green and, similar to the other races, are capable of flight. The Sylphs, along with the Cait Siths, Imps, Spriggans, and Undines, are also one of the five lightweight races that are capable of using the «Wall Run» skill.[3]

Flight: Like all other races, the Sylphs are known to be able to sprout wings that allow them to fly. The vibration of their wings is known to make a sound similar to that of a stringed instrument.[1]

Stealth: Sylphs specialize in using stealth spells that allow them to hide from monsters and other players. Only players with a high-level Scan ability are capable of seeing through this defensive spell. Penetration magic is also known to be able to break through this barrier.[1]

Enhanced Speed: Sylphs, like the Cait Siths, are known to be incredibly fast and agile. They are known to use their enhanced speed and agility to strengthen their attacks.[4]

Wind Magic: Although they are capable of learning other types of magic through hard practice, Sylphs are known to be the masters of Wind Magic.[2]

Wall Run: As one of the lightweight races, the Sylphs are capable of using the skill Wall Run, that, as the name suggests, allows them to temporarily run on walls. The normal limit is a distance of ten meters but those with an extremely high sprinting speed are known to be able to run for about thirty meters.[3]

The symbol of the Sylphs in the center of their wings. 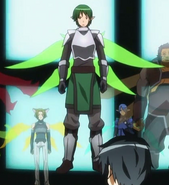