Takamine Momiji (高峰 紅葉, Takamine Momiji?), known as Kureha (クレハ, Kureha?) in «Gun Gale Online» (GGO), is an original Sword Art Online game character and one of the heroines in Sword Art Online: Fatal Bullet. She is the Protagonist's childhood friend and is a well known Gun Gale Online player, even recognized by the top players in the game, such as Itsuki, for her reliability and good battle analysis skills.[4]

Kureha has a blue-eyed and pink-haired avatar, with a single ponytail to her right. Her black tanktop and white skirt is accompanied by her prominently pink jacket, along with her white gloves and boots. Her canon choice of weaponry is a Draque L Shamal submachine gun that resembles a real life Uzi as her primary, and an optical rocket launcher Deneb Kaitos as a secondary.[5][6][7]

Kureha is a cheerful personality with a lot of energy and confidence in herself. She likes to take the lead when given the chance and is more of a solo type player, which is why she is known to jump from Squadron to Squadron.[4] Zeliska refers to her as a carefree type as well.[8]

In the real world, Kureha has a much more reserved personality, living under the shadow of her genius sister and trying her best not to disappoint anyone. While she claims she has the same personality in both the virtual and the real world, she actually feels a great burden on her shoulder in real life.[9]

Kureha is a long time childhood friend of the Protagonist.[10] She was devastated when her family had to move away due to her parents's job, as well as her sister's schooling, but never blamed her sister for it.[10] She did her best to meet the expectations and not disappoint her sister.[citation needed]

One day, due to needing a partner for an upcoming tournament in Gun Gale Online, Kureha invited the Protagonist to join the game. After Kureha taught them the basics of Gun Gale Online, the two entered the competition, during which she accidentally sent the Protagonist through a warp gate by tinkering with a control panel. Upon reaching their position seconds later, she found the Protagonist under attack by Kirito. When she targeted Kirito to save her friend, she was promptly stopped by Asuna, who had approached her from behind. The situation settled as everyone realized that Afasys, the object of Asuna and Kirito's interest, had already been registered to the Protagonist. Angry at the Protagonist due to missing her chance at a special reward, she scolded them, declaring that she had joint ownership rights over their possessions, causing Afasys to register her as the Protagonist's superior.

Having formed a connection with Asuna and Kirito during their first meeting, Kureha, along with the Protagonist, was invited to Kirito's quarters to meet his other friends. She was quite surprised at the high female-to-male ratio of his circle of friends, feeling quite glad that she had found a group of people where she would not be regarded as the group's mascot due to being the only female player. At that point, Kureha thanked the Protagonist for sharing some of their luck with her, and thus proceeded to give them a tour of SBC Glocken to show her appreciation.

Some time later, having learned that Afasys is the key to unlocking a brand new update area called SBC Flügel, Kureha joined the Protagonist and Afasys to collect some parts scattered from the ship that were needed for Afasys. While working on this quest, they defeated Bazalt Joe on two separate occasions in a duel, thus acquiring vital information from him regarding the Afasys parts. During these encounters, Kureha realized that, despite his efforts to take control of Afasys, Bazalt Joe was an honorable and trustworthy player.

When all parts were collected and the SBC Flügel update area was activated, Kureha claimed a spot on the four-person squad, including the Protagonist, Afasys and Kirito, that would assault the ship. Upon reaching it, they faced a monster named the «Gatekeeper» that was protecting SBC Flügel. Having realized that the boss was too powerful and possibly intentionally unbeatable, Kureha and Kirito decided to remain on the battlefield and distract the gatekeeper in order to ensure the Protagonist and Afasys' safe escape, fearing what would happen to Afasys as an in-game-item if the Protagonist died in action. Shortly afterwards, Kureha, along with Kirito, returned to the latter's quarters in SBC Glocken, where she explained how they managed to barely escape without dying.

After Afasys remembered a final requirement and granted the group access to SBC Flügel, everyone decided to create a Squadron for ease of access to the area, provided by the system. Kureha felt uneasy letting the Protagonist be the Squadron leader, since she had always acted as the leader between the two when they were kids. Yet, not wanting to be granted the leadership by grace, she decided to challenge them to a duel to be the leader, followed by Kirito, Sinon and Yuuki also deciding to fight for the leadership in a battle royale. Kureha also offered Zeliska and Itsuki a chance to join the fight, but both of them rejected the offer. In the end, Kureha lost the battle, granting the Protagonist the right to be the leader.

Following her loss to the Protagonist in the only field where she did not feel useless, Kureha decided to take a break from the celebration of the Protagonist becoming the new Squadron leader and headed out to SBC Glocken, where she was joined by Zeliska shortly afterwards. Kureha shared with Zeliska her concern that the others had joined the fight due to knowing she would lose. Plagued by her complex of being overshadowed by her sister, Kureha worried that the same was about to happen with the Protagonist. Eventually, she was comforted by Zeliska, who reminded her that everybody needed to vent from time to time. 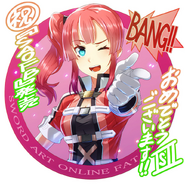 Kureha with other members of the SAO cast on a visual for the SAO Beater's Meeting 2019 event.

Kureha with Afasys, Asuna, Itsuki, Kirito, Sinon, the Protagonist and Zeliska on an illustration commemorating Fatal Bullet's second anniversary.
Add a photo to this gallery

Characters
Retrieved from "https://swordartonline.fandom.com/wiki/Takamine_Momiji?oldid=169484"
Community content is available under CC-BY-SA unless otherwise noted.