Episode 3
Tetsuo (テツオ, Tetsuo?) was one of the 10,000 players who were trapped in «Sword Art Online» and a member of the «Moonlit Black Cats», a small guild. He was killed along with most of his guild when a trap was triggered, calling multiple monsters and preventing the use of crystals.

Tetsuo was a mace user and the only front line attacker in his guild's formation. Besides his mace, he also used a small kite shield in his left hand. He wore a set of black armor, consisting of a chest and shoulder plates.[2] Underneath the armour, he wore a purple tunic.[2]

Tetsuo was a cheerful and easy going person.[citation needed]

When Kirito was invited into their guild, Tetsuo expressed joy with his guild mates. He was one of the people who supported the idea of hunting in a dangerous dungeon and died on June 22, 2023 in a trap in the Labyrinth on the 27th Floor along with most of the other members of the guild. 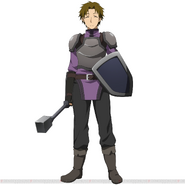