The Child's Egg refers to a quest item that players must retrieve for the Deep Sea Plunderers quest in ALfheim Online.

The Child's Egg is a large, green, semi-transparent egg in the shape of a perfect sphere. On the outside, the egg looks like a gigantic pearl, but, with enough lighting, an underdeveloped sea creature can be seen coiled inside the egg.

The Child's Egg is the egg of a creature that is said to one day rule the sea and air. It was hidden in a nest inside the lowest room of the Undersea Temple that was protected both by a special barrier and various sea creatures, like the Armachthys.

Kraken the Abyss Lord wanted to acquire the egg to get his revenge on the gods of Asgard, but was unable to pass through the barrier that was protecting the temple. He therefore disguised himself as an old man, named Nerakk, and asked fairy warriors to help retrieve the egg. He claimed that it was a pearl that he was planning to give as a present to his friend, but it was stolen by thieves residing in the temple.

Kirito and his party acquired the egg in hopes of finding a whale during the Deep Sea Plunderers quest. However, just when Kirito was about to hand in the egg to Nerakk, Asuna stopped him after Lisbeth pointed out that they never did see any thieves in the temple. Bringing what they assumed was a pearl out into the light, they noticed that it was actually an egg and refused to give it to Nerakk. After a short struggle, their battle with Nerakk, who had now returned to its original form as the Kraken, was interrupted by Leviathan the Sea Lord who retrieved the egg from the fairies, saying that he would find a new home for it. 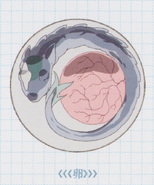 The egg in a special Extra Edition booklet.

Concept art for the Child's Egg from the Design Works art book.
Add a photo to this gallery
Retrieved from "https://swordartonline.fandom.com/wiki/The_Child%27s_Egg?oldid=132069"
Community content is available under CC-BY-SA unless otherwise noted.