«The Fatal Scythe» (ザ・フェイタルサイズ, Za Feitaru Saizu?) is the Boss of the Hidden Dungeon located beneath the Town of Beginnings on the 1st Floor of Aincrad.

The Fatal Scythe is a massive, legless skeleton, clad in a tattered black robe (red inside) and carrying a large silver scythe that is as big as the boss itself.[citation needed]

The Fatal Scythe is an extremely powerful boss that is able to deal a serious blow with just one swing from its scythe. It was capable of sending both Kirito and Asuna flying and, even though both of them blocked the attack together, they still lost half of their HP from the blow. The two also had extreme difficulty getting back on their feet after receiving the attack.

The boss also prefers to attack in the shadows, as it had attacked Yulier from a side passage in the corridor and was not seen until the corridors around the safe area began to change.

The boss is also unidentifiable in terms of battle level, making Kirito presume that the boss was as strong as the ones on the 90th Floor and above, and considering its immense strength, that does not seem to be too far fetched.

It was fought by Asuna and Kirito when they were trying to help Yulier rescue her guild leader, Thinker, who had been trapped in the area's safe zone. Its battle level is unknown, but Kirito suspected it to be as powerful as the 90th Floors' bosses. This was proven when it was able to send both Kirito and Asuna flying, despite them blocking its strike together. It was only through the intervention of Yui that The Fatal Scythe was defeated.

It is unclear, but one can easily assume that Kirito and Asuna would not have survived the fight, had Yui not intervened by using the GM console.

The Fatal Scythe while seen by Kirito and Asuna.

The Fatal Scythe's appearance - front view of the face.

The Fatal Scythe's appearance - side view of the face.

The Fatal Scythe, scared by Yui.

The Fatal Scythe before being completely destroyed by Yui's sword.

The Fatal Scythe and its level from the Anime Sword Art Online no Subete artbook. 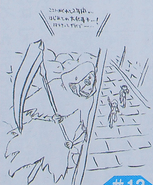 Add a photo to this gallery
Retrieved from "https://swordartonline.fandom.com/wiki/The_Fatal_Scythe?oldid=155631"
Community content is available under CC-BY-SA unless otherwise noted.