Volume 4 Chapter 5
Tonky (トンキー, Tonkī?) is a Beast-type Evil-God class monster which Kirito saved in Jötunheimr. Later, it formed a friendship with Kirito and Leafa, turning it into a friendly Non-Player Character (NPC), and allowing them to ride on its back.

Tonky looks like a spatulated fish, or a flat rice paddle from the side with four pairs of wings that resemble fins, numerous ivy-like tentacles hanging from both sides of his body.[1] It also has three black eyes on each side and an elephant-like trunk for a nose.[1]

The first thing that Kirito and Leafa noticed after dropping into Jötunheimr were two evil-god monsters fighting from a distance. It was clear that the Beast-type evil god (Tonky) was losing against the humanoid-type evil god. Under Leafa's request, Kirito decided to help the beast by drawing the humanoid-type god into the water. The beast-type looked like a mix between a jellyfish and an elephant so Kirito assumed that it was a water-type. After defeating the humanoid-type evil god, the beast-type evil god lifted Kirito and Leafa onto its back and traveled to the center of Jötunheimr. While traveling, Kirito and Leafa decided to name it Tonky after a childhood book that they had both read when they were younger. After arriving, Tonky went into hibernation mode and quickly recovered its Hit Points. Kirito and Leafa got off of its back, but aided it when it was attacked by a player party. Just as Tonky reached a low level of health, it awakened and transformed into a flying beast. Kirito and Leafa successfully scattered the remaining players and Tonky lifted the two up onto its back and flew to the top of Jötunheimr, allowing them a glimpse of an inverted ice pyramid and the Holy Sword Excalibur at the bottom of it. As Kirito and Leafa decided not to risk trying to clear the pyramid dungeon, Tonky left them at a staircase, which took them to Alne through a secret passage.

In an attempt to retrieve Holy Sword Excalibur, Kirito lead a party, consisting of himself, Asuna, Klein, Leafa, Lisbeth, Silica and Sinon, through Jötunheimr. When they arrived at the top of Jötunheimr through a secret passage, they summoned Tonky to transport them to an inverted ice pyramid dungeon, known as Thrymheim. However, in the middle of the flight, Tonky suddenly brought them down enough to see that players were massacring its kind. The fairies were then approached by an NPC, named Urðr, who explained the situation to them and requested for them to retrieve Excalibur from Thrymheim. Tonky then transported the fairies to the entrance of the dungeon.

After the fairies obtained the sword, Tonky saved the group from falling into the Great Void.

Tonky in the anime. 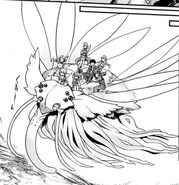 Tonky in the Calibur manga.