The «Type 54 "Black Star"» (五四式・, Go-jū Yon Shiki Heishin?) is a handgun used by Sterben in Gun Gale Online. A real life version of the gun was also used by Asada Shino, who took the weapon from a robber and shot him with his own gun.

In the year 2020, Asada Shino, then eleven years old, entered a post office with her mother. Shortly afterwards, a robber armed with a Type 54 handgun and likely on narcotics entered, demanding money. The robber shot an employee after he attempted to activate an alarm, then threatened to shoot Shino's mother. At that point, Shino bit the man on the arm, causing him drop the gun, which Shino seized and shot him in the torso. Shino's attacker, however, was not killed by the first shot, in part due to the fact that he was drugged and in part due to the low stopping power of the Type 54. The robber attempted to seize the gun, however, in spite of the man's attempts to disarm her and the gun's severe recoil, Shino managed to fire two more times, finally killing the man with a shot to the head. In spite of successfully protecting her mother, Shino was still traumatized by the incident, resulting in a great fear of guns, and to a lesser degree, men.

Five years later, in 2025, a mysterious player calling himself «Death Gun» appeared in the VRMMO First Person Shooter «Gun Gale Online». Death Gun stated that his Type 54, or «Death Pistol», as he called it, could kill a player in real life if they died in game, in spite of the safety features in the AmuSphere that should make that impossible. Kirigaya Kazuto was hired by Kikuoka Seijirou to investigate the incident, during which he met Asada Shino as her avatar, Sinon. Together, Kirito and Sinon managed to defeat Sterben in-game and discover the truth behind his murders. It was revealed that he used his optical camouflage to read the names and addresses of players who entered the Bullet of Bullets tournament. At first, Shinkawa Kyouji would control Death Gun's avatar, Sterben, to shoot the players in game, while Shinkawa Shouichi would inject Succinycholine, a paralytic drug that causes cardiac arrest, into the victim as soon Kyouji shot them with the Type 54 handgun in-game, but during the Bullet of Bullets tournament, they requested the help of another Laughing Coffin member, Kanamoto Atsushi (Johnny Black), to help with the murders in real life, while Shouichi and Kyouji exchanged places, as Kyouji wanted to be active in the real world that time. 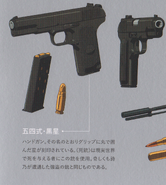 Retrieved from "https://swordartonline.fandom.com/wiki/Type_54_%22Black_Star%22?oldid=170376"
Community content is available under CC-BY-SA unless otherwise noted.