Ugachi was a goblin that was twice as large as his henchmen, wore scale mail and had a decorative feather of primary colours on his forehead. He had yellow eyes with a tinge of red and yellow untidy teeth. Ugachi was equipped with the same kind of machete as the other goblins wield, except that Ugachi's was larger. Although Ugachi was not tall, he was quite heavy and muscular.

Ugachi was more intelligent than the average goblin, as shown by how he was far quicker to react to humans attacking them and realising that they were planing to douse the fires that were lighting the caves.[1] Ugachi was also arrogant, which is clear from his manner of speech, for example, how he refers to himself with a -sama honorific. He was also a malicious, hateful and revengeful creature, as shown by his violent outburst and his eyes only showing overwhelming hatred after Kirito cut his left arm off. 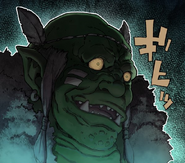 An illustration of Ugachi by Yamada Koutarou for Alicization Episode 04.