Queen of the Lake

SII Episode 15
Urðr (ウルズ, Uruzu?, transliterated as Urd or Urdr) is one of the rulers of the Beast-type Evil Gods in ALfheim Online and the NPC that gives «The Holy Sword of the Ice Palace» quest, the real quest for acquiring the «Holy Sword Excalibur».

Urðr has a beautiful face with a serene expression and ladylike elegance. She is over 3 meters tall, has turquoise pupils and wears a light-green long dress. She also has a flowing voice, tinged with a solemn effect. The skirt of her wavy fin-shaped blond hair, flowing from the back to the feet, is like tapered, divided and undulated tentacles. Her limbs are covered by pearly sparkling scales.

Urðr was created by the Cardinal System’s Automated Quest Generation function, which based the character on a myth from Norse mythology. Unlike most quest NPCs, Urðr's core programming is connected to the language engine module, therefore, instead of having a fixed response routine, she has a certain level of Artificial Intelligence and is thus capable of much more flexibility in her dialogue routines as well as sounding far more realistic than a regular NPC.

Urðr appeared to Kirito's party after Þhrym enlisted the help of the players of ALfheim Online to massacre the Beast-type Evil Gods roaming Jötunheimr. She told them the story of how Jötunheimr was turned from a beautiful and tranquil world full of greenery into a barren wasteland of frost after Thrym threw the Holy Sword Excalibur into Urðr's Spring, cutting off the blessings of the World Tree. She then explained that Thrym wanted to massacre all the Beast-type Evil Gods within Jötunheimr to render her powerless and thus, no longer restricted by Urðr's power, he would be able to invade Alfheim. Then, saying that Thrym had left his castle barely defended, she asked the fairies to invade Thrymheim and remove Excalibur from the Plinth of Thrymheim before the last Beast-type Evil God was killed to stop Thrym’s plan. She also gave them a medallion that kept track of how many Beast-type Evil Gods were still alive, before she departed.

Character designs for Urðr in a special booklet. 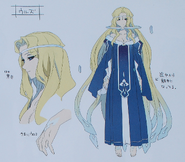