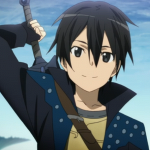 Not much to say here. I'm just a second-year (currently) high school student, who, during my 2015 winter vacations (was still in middle school) started watching the anime SAO. I really liked the anime and finished watching its 1st season in less than 2 days. After watching the 2nd season as well I decided to read the light novels to see the differences, and I ended up enjoying readind them even more than watching the anime (which, surprisingly, had never happened before). After reading the light novels that were translated to my language (portuguese) at the time, I still had some doubts and curiosity (mainly curiosity) about the series, that's when I discovered this wiki. I learned quite a lot here and decided to help with what I know aswell.

Retrieved from "https://swordartonline.fandom.com/wiki/User:Spilari?oldid=156293"
Community content is available under CC-BY-SA unless otherwise noted.