Order of the Dark Knights

Alicization Episode 27
Vixur Ul Shasta (ビクスル・ウル・シャスター, Bikusuru Uru Shasutā?) was a supporting character in the Alicization Arc. He was the commander of the Order of the Dark Knights, a member of the Ten Lords Assembly that ruled over the Dark Territory in Underworld, and had a romantic relationship with his subordinate, Lipia Zancale. Unlike the majority of other lords of the Dark Territory, Shasta sought peace and secretly opposed Emperor Vector's plan to invade Human Empire. Vixur Ul Shasta was killed with a poisoned needle by Fu Za when Shasta attempted to attack Vector. 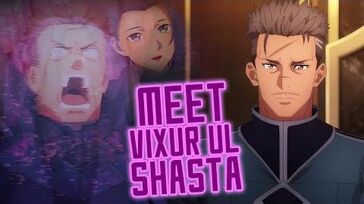 Shasta had a husky voice and a towering stature, not losing even against ogres in terms of height, despite being of the human race.[5] He had deep, black hair that was trimmed short, black eyes and an orderly moustache.[5] Shasta also had a shallow scar running from his brow to the bridge of his nose.[2]

In the palace, Shasta wore a plain hemp shirt that covered his rising burly muscles which threatened to burst the shirt's buttons.[5] On duty, Shasta wore full-body pitch-black armour with countless scratches carved into it.[2]

Vixur Ul Shasta was one of the few people in the Dark Territory who was not controlled by a lust for conquest and considered the negative outcome of a war with the Human Empire.[5] He thus supported the idea of peace and was even willing to kill other members of the Ten Lords Assembly to achieve it.[5] Shasta was also the only lord who proposed to the woman he loved, instead of taking her by force.[5] Although Shasta was an open-hearted man, he was also prudent, thus he had multiple layers of defensive arts prepared in his private room.[5]

Born to a novice knight, Shasta was sent to a cadet school affiliated with the Order of the Dark Knights once he reached a sufficient age to wield a wooden sword. At the cadet school, Shasta attained victory after victory in the selection tests, resulting in him being scouted by commander of the knights at the time.[6]

At around the age of twenty, following the survival of the commander in a battle against Integrity Knight Bercouli Synthesis One, Shasta was ordered by his master to kill him in combat, in order to impart the knowledge of incarnation that the latter had learnt from his battle against Bercouli. While Shasta was able to defeat his master, the incarnation the latter had exhibited during the battle left an unhealing scar on Shasta's cheek, allowing the disciple to experience the power of willpower with his own body.[2]

Years later, at the age of thirty-seven, Shasta faced Bercouli in battle himself, resolved for his death during the encounter, ensuring that he would not burden a disciple with the fate of killing their master. However, during the battle, Shasta displayed incarnation strong enough for his sword to face Bercouli's without being deflected, thus impressing the Integrity Knight. At that point, Shasta was informed by his opponent that mere killing intent would not have been able to achieve such a feat. The battle then ended peacefully with Shasta being advised to contemplate on this thought until their next encounter, before the Integrity Knight took his leave.[2]

One day on the 11th Month of the Human Empire Calendar, Vixur Ul Shasta received a report from his subordinate, Lipia, on the death of Quinella. Hearing this news, Shasta claimed that it was their chance for peace, explaining how a war with the Human Empire would lead to numerous casualties and the resulting imbalance among the races of the Dark Territory would lead to another age of conflict. Shasta revealed that he planned to kill four other lords, including D.I.L., in his pursuit of peace.

After a short moment of silence, Shasta changed the topic and proposed to Lipia, but they were suddenly informed of the throne room lock quivering. Along with the other lords, Shasta came to the throne room, where they found Gabriel Miller, logged in as Emperor Vecta, on the throne. When it was Shasta's turn to introduce himself to Emperor Vecta, Shasta inquired on Vecta's intentions. Hearing that the emperor desired war, Shasta was the only one who remained kneeling among the war cries of the other lords.

Two days after Lipia's death, Shasta and the other lords were summoned to the throne room. As Shasta was about to attack Vecta to salvage the opportunity for peace, he and the other lords were informed of an assassination attempt on Vecta that took place to days prior. Enraged by the sight of Lipia's frozen head that Vecta displayed a few moments later, Shasta drew his sword, the «Oborogasumi», unconsciously activating its Armament Full Control state. However, before Shasta could execute his attack, he was struck by a needle filled with highly-lethal poison, thrown at him by the Assassin's Guild's leader, Fu Za.

Yet, just as Shasta died, his will unleashed the recollection release ability of his sword. This created a ravaging tornado that directly assaulted the Fluctlights of anything it made contact with, including Fu Za, the Mountain Goblin Chief Hagashi, the Plains Goblin Chief Kubiri, as well as D.I.L's right leg, before it stopped expanding and formed an image of Shasta's body. At that moment, the visual of Shasta launched its fist upon the Dark Emperor; however, Shasta's will was unable to affect the endless abyss of Gabriel's Fluctlight and was instead absorbed and vaporised by it.

Vixur sharing a hug with Lipia in his memories.

Vixur subconsciously activating the Armament Full Control Art of his weapon after witnessing the unveiling of Lipia's head.