Volume 2, Warmth of the Heart, Part 2

The West Mountain (西の山, Nishi no Yama?) is a field dungeon on the 55th Floor of Aincrad.

The West Mountain is a mountain slightly less than 100 meters high that, from a larger distance, looks as if its peak reaches the sky. Although the mountain looks dangerously steep from afar, it is actually rather easy to climb. Like the rest of the western region, the mountain is covered in snow and icicles dangling from the icy cliffs.[1]

The top of the mountain is extremely close to the bottom of the next floor and is covered in an enormous amount of huge crystal pillars that stand out from the thick layer of snow.[1] Depending on the lighting, the crystals may either look like they are gray or purple.[2] A gigantic and deep cave in the shape of a hold of about ten meters in diameter is located at the peak of the mountain and is surrounded by crystal pillars.[1]

On June 25, 2024, after accepting a quest from a nearby hamlet, Kirito and Lisbeth came to the West Mountain in search of the white dragon that was rumored to drop a rare crafting material. As they arrived at the top of the mountain, Kirito told Lisbeth to get her Teleport Crystal ready. As they continued their search for the dragon, they noticed a giant hole in the ground and Kirito teased Lisbeth about falling in. Just then, the dragon's screech sounded through the air and Kirito ordered Lisbeth to hide behind a crystal pillar.

As Kirito was about to defeat the dragon, Lisbeth came out of hiding to congratulate him, however, the dragon then started its blizzard attack and sent Lisbeth flying over the giant hole. Kirito promptly sprinted towards Lisbeth and grabbed her as she was starting to fall. He then stabbed his sword into the wall to decrease the speed of their descent. Just before reaching the ground, he let go of his sword and used both hands to hold Lisbeth tightly, while rotating to be the one to take the fall damage.

After a few minutes, the two used a potion to recover their hit points. After multiple failed attempts of finding a way out of the hole, they decided to spend the night camping in the cave as it was getting late and monsters did not spawn within the cave. They then cooked some soup to eat before Kirito materialized two sleeping bags. After they got into their sleeping bags, Kirito told Lisbeth some stories about his adventures and afterwards, they went to sleep while holding hands.

The next morning, while chatting over tea, Kirito thought of an idea and ran to the the middle of the pit where he dug up a «Crystallite Ingot». Kirito then realized that the pit was actually the dragon's nest and that the crystal was actually the dragon's excrement, which was why nobody before them could find the crystal. After childishly throwing the crystal back and forth, Kirito finally stored it in his inventory. Then, while thinking of a way to get out, Lisbeth remembered that the dragon was nocturnal and realized that it should be returning to its nest soon. At that moment, the dragon came flying down the hole.

Kirito was about to fight it again, but, while looking at the dragon's tail, he realized that they could use the dragon to get out of the pit, so he grabbed Lisbeth and confused the dragon by running around the pit's walls at a speed faster than the dragon could follow. Then, Kirito forcefully grabbed the tip of the dragon's tail and the surprised dragon quickly took flight. After Kirito let go of the dragon's tail after they were above its nest, they started free-falling and, after several seconds, they landed into the snow and glided their way to near the mountain's summit.

In September 2024, Kirito went to the mountain to obtain some ice to treat the ill Asuna with.

The West Mountain covered in snow even in summer.

Icicles dangling from a cliff.

A sunrise from the West Mountain.

Concept art for the West Mountain from the Design Works art book. 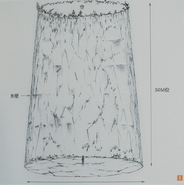 Concept art for the dragon nest in the West Mountain from the Design Works art book.
Add a photo to this gallery