Millennium Twilight
YUNA (ユナ, Yuna?), also known as Black Yuna (黒いユナ, Kuroi Yuna?), is a supporting character in the Ordinal Scale side story and its epilogue, Cordial Chords. YUNA is an Artificial Intelligence (AI) created by Professor Shigemura Tetsuhiro[7] to attract Sword Art Online (SAO) players to Ordinal Scale as an augmented reality (AR) idol for his plan to revive his late daughter, Shigemura Yuuna.[1][3] YUNA is the first augmented reality AI idol in the Sword Art Online universe and she serves as the image character for Ordinal Scale, greatly contributing to the game's popularity.[4] In-game, she appears to perform one of her songs during event battles, providing buffs to the players with her songs, and is referred to as the game's Diva (歌姫, Utahime?).[4]

YUNA's management had been entrusted to an entertainment company named «Ario Room» by the professor, although her schedule was effectively decided by Shigemura Tetsuhiro and Nochizawa Eiji. As an entity created based on Sword Art Online's artificial intelligence, YUNA's program requires access to the Sword Art Online server to function.[3]

Following the Ordinal Scale incident at the New National Stadium, Shigemura Tetsuhiro ceded his management rights for YUNA to Ario Room and Kamura.[3] After the professor relinquished his rights to the AI, the new management created at least five copies of YUNA that operated concurrently. Unable to bear the idea of copies of her existing in the world, the original YUNA began accumulating errors that would have eventually led to her collapse. However, her programing was stabilised by a more advanced AI reproduction of Yuuna with Eiji's help.[8] 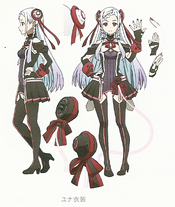 YUNA's appearance was modelled faithfully after Shigemura Yuuna[7] and her voice was based on a sample of the real Yuuna's voice.[8] YUNA has a slender body and legs, making her similar to a fairy.[7] Her face was identical to Shigemura Yuuna's;[7] however, unlike the original, YUNA has long, straight, pure white hair and ruby-red eyes.[7][8] She wears a futuristic, black and purple[7] one-piece dress and thigh-high socks.[8]

As a Navigation Pixie, YUNA wears a white dress with violet highlights and black, toeless socks.

YUNA was originally created with a very simplistic personality. The only impetus programmed into her was a desire to sing for a large audience. However, she began showing interest in other topics over time, such as Eiji's book or the pieces of candy they were gathering.[3] According to Kirigaya Kazuto, YUNA has an impish and coquettish personality.[9]

YUNA was created by Professor Shigemura Tetsuhiro based on Sword Art Online's artificial intelligence, granting her exceptional conversational skills for an AI.[3] The professor created the idol YUNA as a tool in his plan to resurrect his daughter as an artificial intelligence. YUNA's appearance was based on the original Yuuna in order to have Sword Art Online players recall any memories they had of Yuna in Sword Art Online.[9] Tetsuhiro himself saw YUNA as a mere AI data crawler whose appearance was simply based on his daughter[7] and was thus cold towards her.[9]

On April 24, 2026, YUNA appeared at a promotional event to advertise her first concert at the New National Stadium on April 29, 2026. Later that evening, YUNA participated at the Kagachi the Samurai Lord event battle at Akihabara UDX, Chiyoda Ward in Ordinal Scale, performing a song named "longing". In the aftermath of the battle, YUNA granted bonus points to the players who participated in the battle, as well as a kiss for the most valuable player (MVP) of the battle, Asuna.

YUNA was also secretly observed as Eiji assaulted a member of the Fuurinkazan after the boss battle. Following Eiji's victory against the Fuurinkazan member, YUNA acquired a piece of candy that represented the memories Eiji had stolen from the player; however, YUNA herself was unaware of its actual significance, instead being told by Eiji that it was proof of her songs had thrilling her audience.

The following evening on April 25, 2026, YUNA appeared during the event battle against The Storm Griffin in Yoyogi Park, Shibuya Ward, where she sung another one of her songs named "delete". In the aftermath of the battle, YUNA attempted to congratulate Asuna on becoming an MVP again; however, since Asuna fled from her, YUNA decided to take her leave without giving her another kiss.

On April 26, 2026, YUNA appeared during an MMO Stream programme about Ordinal Scale's popularity as a special guest to promote her upcoming live concert. Later that day, YUNA visited Eiji with the new pieces of candy that she had acquired after Eiji stole the memories of the other Fuurinkazan members the previous evening. At that point, YUNA became interested in Eiji's book and read an excerpt about Kirito the Black Swordsman from it. This piqued her interest even more, prompting her to urge Eiji to read the book to her.

That evening, YUNA participated in the Ordinal Scale event battle against The Strict Hermit at the Ebisu Garden Place in Shibuya Ward. She began her performance by singing "longing"; however, after the first seven minutes of the battle, she ominously switched to singing "delete" just as an additional boss, Dorz'l the Chaos Drake, spawned on the battlefield.

On April 28, 2026, YUNA discussed her concert that would be held the following day with Eiji, before asking him to read his book to her again. Specifically, YUNA desired to hear what the book wrote about Eiji himself but instead learnt that the boy was never even mentioned in the book due to not participating in the battle to clear the game. Later that evening, YUNA arrived at the battlefield for the event battle against Waheela the Black Wolf at the Takeshiba Pier in Minato Ward to grant some bonuses to the players, angrily observing Kirito's struggles against the boss throughout the remainder of the battle.

The following day on April 29, 2026, YUNA held her first live concert at the New National Stadium. She began her performance by singing a song titled "Break Beat Bark", riding on her mascot for some parts of the concert. However, after her first song, the workstation controlling YUNA was disabled[9] by Professor Shigemura Tetsuhiro, in favour of beginning his secret plan.

Following the end of the Ordinal Scale incident at the New National Stadium, YUNA's management rights were ceded to Ario Room and Kamura. The new management created at least five copies of YUNA to be able to have multiple instances of her working concurrently. However, as YUNA was created based on Sword Art Online's artificial intelligence, the foundational principle of which is the uniqueness of each individual AI, the mere existence of copies resulted in the original YUNA accumulating errors in her programming, threatening her continued existence.

What remained of White Yuuna's AI module attempted to halt YUNA's further decay by performing some error corrections using her own data; however, the White Yuuna module lacked a crucial memory core that represented YUNA's most precious memory, which was required to fully stabilise YUNA. As such, one of the two Yuunas managed to send a plea for help to Kirigaya Kazuto on May 7, 2026 through a YUNA desktop mascot application created by the idol's new management. The plea for help resulted in bringing Kirito and Nautilus (Eiji) to the Sword Art Online server at Argus's headquarters, where a collapsing YUNA was found by the two boys at a field dungeon on the 40th Floor of Aincrad inside the server, the exact place where the original Yuna had died in the original Sword Art Online. By obtaining the bottle of candy that the original Yuuna had left to Nautilus before her death, White Yuna was able to use it to fully repair YUNA, before fully vanishing from the world.

During Brain Burst's merge with ALfheim Online (ALO), YUNA appeared in Svart Alfheim in hopes of empowering other players through her songs.