«Devil of Run and Gun»

SII Episode 01
Yamikaze (, Yamikaze?, lit. Dark wind) is an AGI-type player in Gun Gale Online and a participant in the 2nd and 3rd Bullet of Bullets.

Yamikaze has a little body and wears an extremely light, dark blue uniform that barely offers any protection and does not restrict his movement.[2] He does not wear a helmet, thus his thin face is always exposed.[2] Yamikaze has dark hair with several middle flocks dyed red.[3] He also wears goggles and has earrings.[3]

Yamikaze's weapon of choice is the «Calico M900A» light sub-machine gun.[2] He does not carry any support weapon, and only carries a plasma grenade on his waist.[2] Due to his build, he relies on continuous running as his best defense, and thus he looks more like a ninja than a soldier while running, leaving only an afterimage behind him.[2]

During the 2nd BoB, Yamikaze was one of the last two surviving players near the end of the tournament. He faced off against the other player, the STR-VIT player XeXeeD, however, he ultimately lost the battle due to XeXeeD's rare weapon and defense equipment, and thus became the 2nd place tournament participant.

Due to Yamikaze's skills at shooting while running, he has been given the nickname of «Devil of Run and Gun» (ランガンの鬼, Ran Gan no Oni?).

On November 9, 2025, Yamikaze was part of an interview held by MMO Stream's show «This Week's Winners», along with XeXeeD, as they were the runner-up and winner of the 2nd Bullet of Bullets the previous month. During the interview, Yamikaze, who was fed up with the boasting XeXeeD, spoke out against him, questioning his speech about winning being based on a player's chosen attribute type. He also mentioned that XeXeeD had only won because he had acquired a rare gun just before the tournament. As XeXeeD continued talking, he was suddenly disconnected from the show and the show likely continued with interviewing Yamikaze, as XeXeeD never returned.

A month later, on December 14, 2025, Yamikaze participated in the 3rd Bullet of Bullets finals. Nearing the end of the tournament, during the 9:45 pm scan, he was one of the last 4 players still alive, as No-no and Fernil killed each other right after noticing that they were right next to each other as soon as they saw the satellite scan. Since Sinon was still hiding in the caves to avoid being detected while Sterben was using his Metamaterial Optical Camouflage, Yamikaze could only see Kirito on his map, 6 km to the northeast of his own position, thus he began rushing to the desert.

A short while later, Yamikaze reached the desert and continued dashing at full speed towards Kirito's location. As Kirito intentionally ignored Yamikaze's presence and since his best defense was running in an unpredictable trajectory, Yamikaze continued dashing and not stopping even to take cover. Suddenly, Sterben fired at Kirito, surprising Yamikaze who did not expect another player being there. As he crouched down to stop and was about to take cover behind a rock, Sinon fired her own shot at Yamikaze's chest. Yamikaze noticed Sinon too late, thus he was killed by Sinon's bullet, while his eyes seemed to show shock, regret and admiration, as his body was sent flying several meters away due to the huge power of the PGM Ultima Ratio Hecate II.

After Sterben was defeated, Sinon checked up on Yamikaze's body and retrieved his plasma grenade, deciding to use it to end the tournament as a draw. 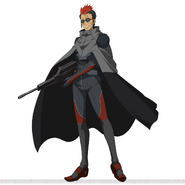 Yamikaze's character design for Code Register.
Add a photo to this gallery

Retrieved from "https://swordartonline.fandom.com/wiki/Yamikaze?oldid=153864"
Community content is available under CC-BY-SA unless otherwise noted.