Episode 5
Yolko (ヨルコ, Yoruko?) is one of the 10,000 players who were trapped in the online game «Sword Art Online». She was a former member of the guild «Golden Apple». She and Caynz worked together to discover who killed Griselda.

Yolko is a 17-18 year old girl, with slightly curly, deep-blue hair in-game and has simple large eyes that are of the same color as her hair.[1] Yolko wore a light blue tunic with a chestguard, knee-length, brown shorts and dark leggings.[2] In her disguise as Griselda's ghost, she wore a cape with a hood, under which she wore a tunic of a darker shade of blue with a chestguard, tight, white leggings and grayish boots[3] and wields an estoc made by Grimlock. In real life, she has brown hair.[4]

Yolko appeared to be a extremely terrified and traumatized person when her former guildmate and boyfriend, Caynz, "died", but she is proven to be a good actor when it is revealed that she and Caynz had staged the murder and Yolko had pretended to have been traumatized.

However, Yolko is not a person who likes to take advantage of people, as she did leave herself on Asuna's friend list, despite it being an obvious way to find out about their trick, likely to atone for her lies and to show that she trusted Asuna, and, at Griselda's grave, she claimed that she was going to properly apologise for doing so after the matter had been resolved.

Yolko is also a person who seeks justice, as proven by how she and Caynz staged their own murders to find out the truth behind Griselda's murder.

She was part of a small guild called Golden Apple, which only had eight members and among them was her boyfriend, Caynz. One day, the group found a rare-drop item and they voted to decide what to do with it. Caynz was in favor of keeping the item, so she also voted in favor of keeping it, but after losing in the voting three to five, they decided to sell the ring. The guild leader, Griselda departed to the front lines to sell the ring but never came back, only for the guild to discover that she was dead. The guild was disbanded but the culprit was never found.

While Kirito and Asuna were having dinner, Yolko screamed when she saw Caynz hanging from the church's window. She later explained that she was going to eat with Caynz, but then got separated. She stayed in an Inn while Kirito and Asuna investigated the murder. She later talked to Schmitt, and started to have a panic attack, before being stabbed in the back by the mysterious murderer that also killed Caynz. She was later seen alive with Caynz at the gravesite of Griselda, confronting Schmitt about Griselda's death. After Kirito saved her from an ambush by PoH and two other Laughing Coffin members, she and her guildmates soon found that Grimlock was responsible for Griselda's death. After Grimlock admitted his crimes, Yolko thanked Kirito and Asuna for solving the case and accompanied Schmitt and Caynz to take their former friend to prison.

Yolko was among the remaining 6,147 players logged out after Kirito killed Heathcliff, prematurely clearing the death game.[5]

At the end of the arc, she participated in the Aincrad Capture Commemorative Party at the Dicey Cafe, along with the other SAO survivors.

Full-length Yolko near the inn. 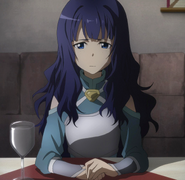