Zumfut (ズムフト, Zumufuto?) is the main settlement on the 3rd Floor of Aincrad. It is located in the north-east of the Forest of Wavering Mists.[1]

Zumfut is a town surrounded by a wall of thick logs, with a large cast-iron gate leading into the town.[2] The town itself is not made of ordinary buildings but three gigantic baobabs that are thirty metres wide, seventy metres tall, and arranged in a triangle.[2] The insides of the trunks were hollowed out into many-floored structures.[2] The space between the three trees was used for Zumfut's Teleport Gate plaza.[2] The northern end of the plaza is a semicircular meeting place.[2] The mayor's office is located at the top of the northern tree, while the south-eastern tree offers lodging for the players.[2] A bulletin board is located outside of this tree.[2] The town's bells are carved directly out of the baobab trunks.[3]

Concerto of Black and WhiteEdit

Kirito and Asuna first came to the town before noon on December 15, 2022. After napping at the inn, they refilled on food and potions, accepted all the single quests in the town and went out to gain experience. They returned to town some time before the beginning of the strategy meeting at five o'clock to have a toast at the tavern.

During the strategy meeting, the creation of the Dragon Knights Brigade and Aincrad Liberation Squad, as well as their member lineups, were announced. Lind then declared that Asuna and Kirito would have to join different guilds, if they chose to join a guild at all, and manipulated Kirito into stating that he had no intention of starting his own guild in public. After also asking Agil's group if they had any intention of joining a guild, he let Kibaou to lead the meeting from that point on. Kibaou declared that his goal was to clear the floor in a week and encouraged the participants of the meeting to recruit more people to join the effort. After informing everyone to read the latest edition of Argo's guide, Kibaou declared that the guild that spotted the boss room first would have the privilege of leading the raid. Meanwhile, Kirito convinced Asuna not to antagonise with Lind because of his attitude. After the strategy meeting, Asuna and Kirito left the town.

A second strategy meeting was held in Zumfut at five o'clock in the evening on December 20 after the Clearers had already finished mapping the Labyrinth, with the Dragon Knights Brigade finding the boss room first. The meeting began with the schedule of the battle the following day, then continued with the strategy for the battle, and concluded with Kirito's report on the Elf War campaign quest and Lind's concluding speech. 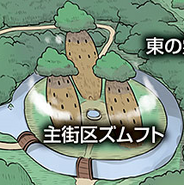 Zumfut on the 3rd Floor map.
Add a photo to this gallery